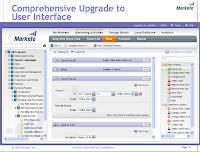 Marketo is introducing a new version of its marketing automation/lead management solution this week. It will actually deliver a lot more excitement than its name, which is Marketo Lead Management 3.0. We spoke with Marketo CEO Phil Fernandez last week and aside from some good natured ribbing about the title of the release, he had some provocative things to say about the state of demand gen, as well as his company’s place in it. Some highlights:

It wasn’t an inaugural address, but Marketo and Fernandez certainly have some inspired positioning. How’s “The Last Frontier of Productivity” for ambition? Fernandez is serious about lead gen’s promise in that context. He believes that supply chains have advanced to the point where appreciable financial gains from them are tough to find. But in demand generation, sales and marketing can work together to find real productivity.


Speaking strictly of the new release, the largest since Marketo’s initial lead management launch one year ago, 3.0 support’s Marketo’s brand stake of a ‘conversational’ approach to marketing automation, including new functionality such as targeting enhancements, real-time alerts, and progressive profiling. What’s progressive profiling? Fernandez says it’s enables companies to continually update prospect information based on web site traffic and then present different offers based on those interactions. “It shows that you know the customer and can have a good conversation,” he says.

Other features include deeper integration with Salesforce CRM. All in, 3.0 has more than 200 new features. “One of the great things about SaaS is you can deliver a lot of candy,” he says.

Cocktail conversations: Fernandez is no fan of scripted conversations from a call-center agent, or a sales rep. He wants 3.0 to give human beings enough automated information to be well, human. “We’re trying to give people information to conduct a conversation, not a script,” he says. “You can’t map out a flow chart with a buyer. That’s like going to a cocktail party and having a script for the entire evening. We think companies have to listen and respond. Listen and respond with nuance.”

Still Stressing Simplicity: “What if Facebook took two months for you to set up? If it did, you wouldn’t have millions of users you’d have thousands. Same with lead management solutions. You can’t tell a customer they will be up in two months and expect them to be happy.”

Check out more in-depth reports and sign up for our bi-monthly newsletter at http://www.demandgenreport.com/
Recent headlines include:

In a recent survey conducted with syndicator KnowledgeStorm, MarketingSperpa concluded white papers are the most effective tool with a marketing potential. Related to the online content registration process, 79% of users and 82% of vendors found white papers influential. On the other hand, webcasts tend to be poor marketers; only 31% of users said they were typically willing to register...Word of mouth is the biggest influence in business-to-business sales more than any other marketing tool, according to a survey conducted by The Keller Fay Group and sponsored by marketing agency Jack Morton Woldwide.